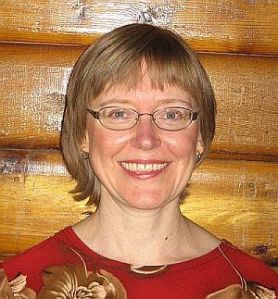 Letters, words, stories, and learning more about them, have always fascinated me. I learned to read when I was 4 by underlining every “p-i-g” in my favourite book, The Three Little Pigs. I wrote my first novel, Leader of the Pack, in grade 7, and tried out poems and short stories, as well as reading stories of any length, right through high school.

I took a break from writing stories to do a degree in Computer Science at the University of Saskatchewan and then a Master’s at Simon Fraser University. My thesis was called Using Modal Structures to Represent Extensions to Epistemic Logics, and I think it had more mathematical symbols in it than letters. But I later discovered that writing a thesis has a lot in common with writing a novel: both need an enticing beginning, step-by-step development of ideas, a logical division into parts, and a satisfying ending. And of course, both require the writer to revise and polish way past the time she thinks she should be done!

When my three sons arrived, I re-entered the entrancing world of children’s books. Sitting on the couch, the floor, tiny chairs at the library or in the car, we read and re-read the boys’ favourites, Katie and the Big Snow, Mike Mulligan and his Steam Shovel, and every dinosaur book in print. We laughed at clever rhymes and learned amazing things, and I decided I would like to try to write like that.

So I took a course in writing for children, and began to write. But I didn’t know how to take the next step, to make my writing good enough to be published, or how to find a publisher. So I went to see the writer-in-residence at the Regina Public Library, Alison Lohans. She read my draft novel and gave me useful advice, and she also told me about the bi-annual CANSCAIP Prairie Horizons conference for children’s writers. (CANSCAIP is the Canadian Society of Children’s Authors, Illustrators and Performers.) In the fall of 2003 I tiptoed in.

Wow! I discovered that Saskatchewan is bursting with wonderful writers for children. I learned that they are regular people, that they are very nice, and that they like to get together to work on their stories. So three of us started a writing group. We met twice a year in person and more often by email, and added one more person. We joined the committee to plan CANSCAIP Prairie Horizons 2005. The next thing I knew, my picture book Bill Bruin Shovels his Roof was being published by Scholastic Canada, and our small group was invited to join the Saskatchewan Children’s Writers Round Robin.

The most important thing I have learned about writing is how much better it is when you are part of a community. When I bring what I think is a polished story to my group, they always find ways to make it better. When I’m discouraged about a rejection letter, they understand. When my story characters won’t do what I tell them and and I can’t figure out where the story is going, they help me get back on track.

The Saskatchewan chapter of CANSCAIP also continues to be hugely helpful with conferences every two years and presentations on aspects of writing for children every spring. In fact, I am currently the president of our chapter.

For some years I have written a musical Christmas play for the children in our church to perform. The first one (2006), The Other Wise Man, was adapted from the 1896 story by Henry van Dyke. The second one, What Child is This? (2007) was inspired by a French short story by Jerome and Jean Theraud, found in Contes de Noel. The fourth (2010) contains a lot of playful sheep and barn animals and was built around the song “The Friendly Beasts”. It is called Where’s the Ba-a-aby? The fifth focuses on Mary and Joseph, and features some very cool dancing angels. It is called Gloria!

My third play (2008) was inspired by a story my husband’s grandmother liked to tell. She came to Saskatchewan with her homesteading parents in 1905. For Christmas that first year, since they had no money for gifts, her uncle carved her a doll out of a turnip. My play The Turnip Doll is a blend of live stage action and pre-filmed sections. I was thrilled to have very talented filmmaker and director Stephen Hall bring it to life for us.

In May of 2010, my adult Easter play Waiting by the Door was produced at my church in Regina. It is a two-act musical based on the story of the prodigal son. My youngest son and I worked together to arrange the piano music for the eight songs I wrote for it. It was a lot of fun (and work!).

I continue to write plays and songs. My play Gloria!  has been published in an anthology called Christmas Stories & More.

My young adult science fiction/fantasy novel Draco’s Child was published by Thistledown Press, and I recently finished another dragon book, tentatively titled Morwaka’s Dreams. Or Dragon Dreams. Not sure yet.  I have a middle grade novel out seeking a publisher, and I have a few more stories on the go. There are so many stories waiting to be written, and I can’t think of a better place to write my share of them than right here in Saskatchewan with the Robins.

This site uses Akismet to reduce spam. Learn how your comment data is processed.